My mother had a good friend, Ann Beallah,  who was a professional costume maker.  I guess as a result of her costume sewing she got into doll making.   When she heard that my family had an ancestor that had signed the Declaration Of Independence she was so intrigued she made these (more less) historical representations.  Meet Mr. and Mrs. John Witherspoon.  John Witherspoon was a Presbyterian Minister and scholar who immigrated from Scotland to the colonies to head the newly formed Princeton University. 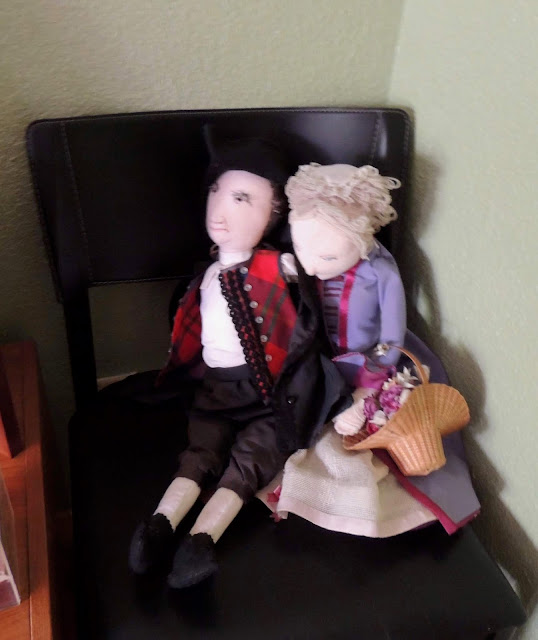 If you are familiar with the Hamilton biography that might ring a bell because John Witherspoon (rightly or wrongly) turned Hamilton down in his application to be a student at Princeton.
Hamilton went off to New York to go to University and some Historians think that situation suited Hamilton better.
The Tartan of his vest is the Witherspoon Tartan.  The Witherspoons were actually lowlanders so I don't really know how that worked?!
Whatever the case they are a sweet and thoughtful couple of dolls!
Have a great week! CW

Posted by cspoonquilt at 1:27 PM

I would love your feedback. You can contact me by email:
cspoonquilt@yahoo.com
For info about my Quilt Classes and Presentations check out my website; www.clairewitherspoon.com

Can I get a whoop whoop